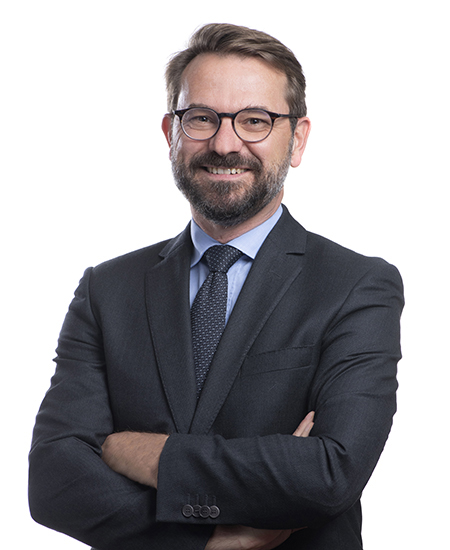 Manuel WINGERT is a partner within the "Mergers & Acquisitions - Corporate law" Department.

A specialist in companies in difficulty, he works on the prevention and management of crisis situations, whether for preventative (ad hoc authorization, conciliation) or collective insolvency proceedings (safeguarding, recovery, liquidation, etc.).

His expertise lies in the law applicable to companies in difficulty, directors’ liability, bonds, commercial contracts, leases, recovery, competition, corporate law and labour law, in both advisory work and any litigation phase.

Manuel WINGERT holds a master’s degree in Business Law from R. SCHUMAN STRASBOURG III University and a DESS Certificate of Aptitude in Company Administration from STRASBOURG IAE. After graduating from PARIS DAUPHINE University, he became a court-appointed receiver authorized by the CNAJMJ.

He began his career in 1996 within the practice of Philippe CONTANT, a court-appointed receiver, remaining his most trusted colleague until 2006 and handling important cases involving companies in northeast France.

He became a member of the PARIS Bar in 2006 and joined the law firm KEROUAZ, specializing in company restructurings, before moving to DELSOL Avocats in December 2013.

He is also a member of the examination board for the HEC Entrepreneurs master’s degree.

Member and correspondent of the French Institute of Practitioners of Collective Insolvency Proceedings – IFPPC.

Manuel WINGERT was elected as one of the Lawyers of the Year 2022 in « Distressed companies » by Le Monde du Droit (Palmarès du Droit 2022).

END_OF_DOCUMENT_TOKEN_TO_BE_REPLACED

PRESS RELEASE - DELSOL Avocats advised NEW MT, a company controlled by the historical shareholder of KING JOUET, a European leader in the toy industry, and managed by Philippe GUEYDON, in the context of its takeover offer over MAXI TOYS (200 stores for the most part located in France and Belgium) subject to judicial reorganization proceedings...